The Sit-Down Heard 'Round the World


I have spent the better part of the weekend apologizing to every friend of color that I have.  Most days of this past year, I have been embarrassed pretty much for the entire human race – I haven’t discriminated.  Even in watching the Trump support movement unfold, I have not discriminated.  After this weekend, I’m calling out the general white population for their lack of empathy, their blatant ignorance and rampant disregard for their fellow Americans.


It was the sit-down heard around the world.  As far as I’m concerned, it’s the greatest sit-down since Rosa Parks.


Colin Kaepernick made a quiet choice to stand up – or take a seat – and express his feelings on a matter that has been plaguing our nation.  He said:

"There's people being murdered unjustly and not being held accountable.  This stand wasn’t for me. This is because I’m seeing things happen to people that don’t have a voice. People that don’t have a platform to talk and have their voices heard and affect change. I’m in a position where I can do that, and I’m gonna do that for people who can’t.”

He didn’t make statements beforehand, there were no announcements.  He thought, and he acted peacefully, and he put himself at risk with his career because his felt that strongly about wrongdoings in our society, among his fellow humans.  If we are fortunate, every one of us has a moment in our lifetime that doing the right thing becomes more important than money or other consequences.


And now people have lost their collective minds over it.  He has been called every name in the book, many of them of a racist nature – thereby proving his point.  His actions were immediately declared a disrespect to military – further proving his point.  He has even been vilified as a “radical Islamic supporter.”  (that one wins the award for Most Ridiculous).  It is apples and oranges to say that he is committing offense to our military; the freedoms our soldiers fight and put their lives at risk for include the right to protest.  Even more ironic are the labels of "stupid," "idiot," "dumber than...." (take your pick), because most probably don't realize that he was a 4.0 student.  I could only laugh sadly at those dismissive "armchair quarterback" comments of "like that privileged asshole's ever been oppressed."  You really think that a mixed race adopted kid from the Midwest never experienced discrimination?


Why is it every time that someone takes a stand for something, it has to be against something that is a far stretch away?


Then everyone wants to throw in his salary, his upbringing, his color or lack thereof, and of course everyone thinks he should have done it their way.  Money doesn’t solve everything, so throwing his at it isn’t going to solve problems.  Using his celebrity to give voice to those who feel they have none – now that’s doing something.  And it worked.  While this was a personal decision, the media and social platforms did they do best; they bit.  And people are talking. 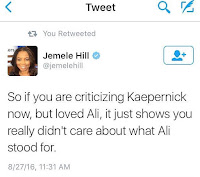 This isn’t the first athlete to make a statement during a pivotal moment.  Think Tommie Smith and John Carolos during the 1968 Olympic ceremony.  How about the beloved Muhammad Ali?


But according to NFL fans, Kaepernick needs to shut the hell up and do his job.  Well, he did.  He played the game he was paid to play, and has continued to do so.  The team management wasn’t scrambling to defend him until everyone went batshit crazy.


The comments that I have been reading on all of the outlets, of people I know and don’t, have been so vile that it sickens me to be of the same species.  I’m not surprised because it’s a way of thinking that I grew up with, that I know too well.  I’m just disappointed that it seems, between Trump’s encouragement and the breakdown of political correctness – something I’m not always in favor of myself – it is most certainly not improving in any way.  We cannot have disagreements about politics without people resorting to name-calling and vicious personal attacks.  The internet only feeds the fire because for the non-celebrities, there are no consequences.  For Kaepernick, there were consequences, and he still chose to face them head on.


It’s a statement that I have been making for years, in my own small way, regarding the National Anthem.  That line about “land of the free” has always been a stitch in my britches because only recently have we made more advanced strides in civil liberties, but still too many have those freedoms denied in various ways by fellow citizens, by the legal and economic systems, by ways some of us cannot even imagine.  Yet there is still just so much anger.  Every time I ever wanted to sit out the song, I didn't have the nuts because it was always in a very "patriotic" crowd.  And our ideas of patriotism have become quite twisted since that cold September day.


I have never liked anything about football.  It may be a brutal sport, but it’s also kind of a sissy one.  So much drama all the time for a bunch of guys grabbing on each other in shiny uniforms and always crying foul or amendments or whatever.  What I do love is an inspirational sports story, and I am a fan of sports heroes.


Your outrage says more about you than you think it does. I highly recommend that everyone - including myself - take a good hard look in their mirrors to see if we are putting in even one bit of the effort and courage that he has displayed, but more importantly – take a harder look at why we aren’t. 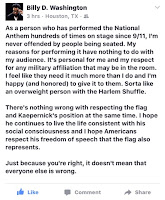 Posted by Kymberlie ~ WriterOfTheStorm.com at 6:44 PM