The Ballad Of Superwoman And Bandita


Let me tell you about my recent life.


I received the news that my friend Byron had passed away, expectedly but still, it's never easy.  I found out an hour after hearing this that another classmate of mine was killed in a horrible car crash.  On this rainy night, my memory was spiraling with my own remembrance of squealing brakes and spinning uncontrollably. 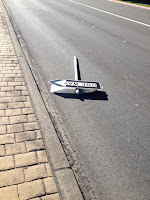 One week later, I was having an empowerment day; trying to raise myself out of my funk, singing loudly along with the stereo "I aaaamm Suuuuuper Womannnnnn... yes, I ammmm"  when BAM... my world was turned upside down in a blinding collision as one careless woman whipped her car in a u-turn directly in front of me at a high speed.  I had nowhere to go but into her car, my own fishtailed everywhere, I was spinning once again, jolted as my car slammed into the median, severed a street sign sending it twenty feet down the road, and Bandita came to fatally rest on what was left of the post.


Posted by Kymberlie ~ WriterOfTheStorm.com at 1:20 AM