“Well, this ain’t no Sunday drive – got the tach red-lined and the throttle opened wide.  Gonna kill a lot of bugs, pass a lot of poles, no, this ain’t no Sunday drive…”
I have been attending races at the Antioch Speedway since before I was born.  Literally, my mom was pregnant when my dad was working the crew of my uncle’s stock car.  My brother was already a toddler wandering around in the mud of the pit.  Back then it was messy, dirty, sporty, fun, and the rules were.. there were no rules.  “You run what you brung” was the philosophy.  It’s always been something I can share with my dad and my brother, and while I still to this day know nothing of the inner mechanics of a car, I can admire the beauty of seeing one pushed to its limits and coming out victorious.
Stock car racing is a rich part of American culture, and has its roots deep in our nation’s history.  It originated during the prohibition period of the 1920s, when runners of moonshine had to figure out a way to outrun the authorities, so they would modify their cars and engines to enable them to get the job done.  This eventually led to organized events by the time the 1930s came around, but there was a lack of consistency in the rules, prompting Bill France, Sr. to form NASCAR (The National Association for Stock Car Auto Racing) in 1948, allowing for unified rules across the independent tracks.  The term “stock cars” refers to cars that have not been modified from the factory originals, however the phrase is more general now, referring to the many classes of cars that race today.
I have loved to drive fast for as long as I can remember.  I’ve driven at speeds as high as 115 mph, including taking the curves of the Santa Cruz mountains in excess of 90mph.  It was a challenge, late at night with no traffic around me, and the thrill of it was exhilarating.  Driving is my favorite danger.  It feeds my need to hover on that slight blur between what is real and what is not.
Something about feeling one with the car - flesh and blood entangled, melded with steel into a streamline of speed.  A hundred and ten, and climbing.  To hear the hum and feel the shifting, the elevation.

When I first met my husband, Roger, he was racing his Dodge Viper on various paved road courses throughout , on the occasional weekend as a hobby.  Roger and I never saw a grown man cry so hard as when he had just run his week-old Viper into a wall, leaving it crumpled on the trackside, where no insurance was going to cover the damage.  I remember seeing that owner sit by his car, devastated, but it is a risk any driver takes.  It’s very easy to lose sight of being grateful for your own good luck of coming out in better shape than the car.
One day I took Roger to the local dirt track to watch a night of racing, and he decided that this would be more fun (not to mention less risk and expense), so he set about choosing his class – the dwarf cars.  As the name indicates, the dwarf car is very small compared to the other hulking cars that run on a dirt track.  They are 5/8 scale in size of the original coupe and sedan original stock cars dated between 1928 and 1948.  They have a reputation of being “cute,” but only until the green flag drops.  Then they can hit an average speed of 80 mph on the straightway of an oval track, and if they had more length can get to about 120 mph.  They use motorcycle engines to run. 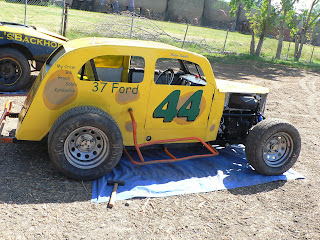 Roger had some fun with the concept of his dwarf car, deciding to capitalize on his native , and dubbing himself “CheezRacer.”  We decorated the yellow car with cheese holes, created an animated likeness, and soon he was very popular among the kids who came with their parents each week to watch their favorites speed around in circles to the checkered flag.
A typical day at the track is very long, an average of 8-10 hours.  Once parked and the car is unloaded from the trailer, thus begins a long checkup of the motor, the body, and the safety equipment, usually in the heat of a very unforgiving sun.  Many do not realize that local independent tracks must adhere to the same safety rules as professional tracks.  A helmet and firesuit are required, as are fire extinguishers that are easily accessible by the officials in the event that your car does go up in flames, something I have seen happen often.
I admit that I like to see the drivers take chances, push their talents, sometimes the result being a crash, a flip or a roll of the car.  I can say this because, while I have seen some brutal accidents, luckily serious injuries are very rare.  In fact, most injuries occur in the pits or the garages versus on the track, such as the time I was almost beheaded by a tire that had come off of a racing stock car, rolling up a double-banked hill several hundred feet at full speed and flying over the fence, right where I had stood seconds before Roger pulled me to safety.

I have seen a few of my friends involved in some spectacular acrobatics, with their cars doing somersaults in the air, and have seen them walk away from it grinning, more upset at their race being cut short than any damage to themselves or the car.  One night, my friend Tony flipped his car in the air, a triple end over end, and he actually got back into it and finished in fourth place.
Two weeks ago, watching Roger drive head on into a concrete wall at 70 miles per hour in a racing incident, everyone kept asking if I was okay seeing that.  I suppose that’s how I know I’ve got a racer’s drive in me – it’s knowing that these are the risks that are taken, and it’s being able to remain calm in the face of twisted wreckage.

I’ve long had a love affair with the track.  So many memories.  I’ve also long had the dream of being out there on the dirt myself.  I’m not too confident in my abilities, however, in sliding around the muddy corners.  It’s a whole different concept from driving on a paved road.  And you need to have confidence to compete, while still keeping in mind that others depend on your skills and your smarts to prevent mistakes that can be quite costly.
My older brother now races, mainly at the track north of the Bay Area, although we have also traveled to Marysville and as well.  He runs a dwarf car also.
Driving is something that can get into the blood, and it’s an infection that never really goes away.  Weaving in between the others – a high speed game of cat and mouse, sometimes with dire consequences.  It requires brain work and strategizing, before the race and while out on the track, not to mention muscle work to keep the car in your line when you find it.  The motto of oval track tracing:  “Drive fast, turn left, repeat…”
And it’s not all about being behind the wheel yourself.  To watch the cars bob and dart and challenge each other, it’s rather fluid in its beauty.  Dancing on pavement, or sliding in the dirt.  The passion to feel the car, to tame this metal beast, and to find the heart behind the dented, painted, hard-driven vehicle – finding the brain beneath the motor.  But when you are moving with the wind rushing in at you, and when you realize that this mechanical Lolita has won you over, it is a defeat that will happily reap its rewards in the muddy grin of a champion.
“It’s a white-knuckle ride, there’s only one thing on my mind – to be the first to cross that finish line.  If I don’t run out of gas and my tires will last, I’m gonna take that checkered flag…”